Never did a part that was completely irrelevant to the functioning of the weapon cause so much difficulty in selection! Most of the difficulty came from the requirement that it be strong enough to use to stove in the head of an enemy as well as allow the weapon to be cocked and fire with it still folded. The original full auto Mac-10 used a flimsy wire stock (which is also incompatible with the semi-auto bolt) and was never considered. Several other examples fell by the wayside through experimentation. 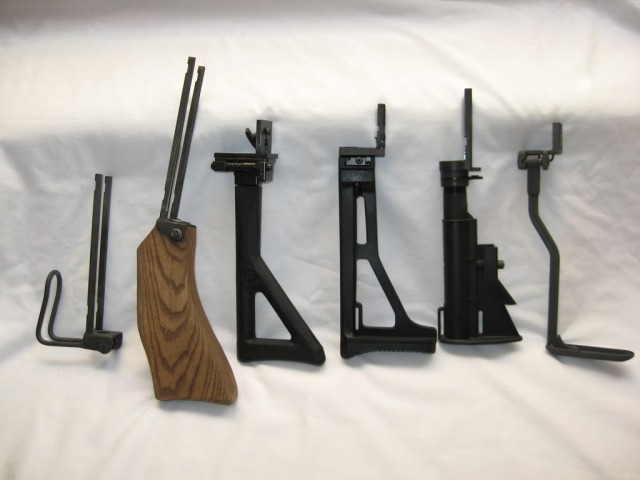 The “z” stock at the far right is the only one that does not block the ejection port or cocking handle when folded or is incompatible with the MPA and Semi bolt. AR-15 tube can be used as waterproof storage for cleaning kit, batteries, etc.

I had hoped to use an AR-15 adapter welded or screwed to the back of the MAC-10 as I could use the spring and buffer guide area as storage, or if necessary to load a spacer and hydraulic buffer to prevent battering (and I still can do that) but the requirement of being able to cock the bolt requires a stock that slopes down, not sticks out straight. Due to BATF rifle regulations it can not be “detachable” but can only be folding. The original MAC-10 wire stock was a unwieldy affair that cleverly collapsed into the receiver, but would require a great deal of machine work to mount, as well as designing a way to permanently preventing it from being withdrawn. I was looking into welding up a spacer for the rear of the receiver to mount the folding UZI stock (still a good design, though not as tough as I would like) when I ran across this:

Well that was a total failure. Not of the AR-stock but of the chosen swing folder. Every one of the stocks in the prototype set have failed. Most failed when practicing a relatively minor butt-stroke against a heavy bag. Universal rejection of this design…sigh. The arm of the stock did not fail nor the ACE adapter, it was the stock butt itself.

Ok, so that leaves me with two options, using an existing adapter to mount an AR type stock or cutting a spacer for an UZI stock moved backward a few inches so as to clear the hand when folded. One of the advantages of the AR-15 stock is that their are so many design choices as developers all over the Country have been working on this design. Also, the unused space in the spring tube (as has been mentioned before) can be used either with a hydraulic buffer and a spacer (if the folding aspect is eliminated) or can be used for a cleaning kit and small tools/parts etc.

The designs I am leaning toward is the Mako Storage stock or the UZI folder, both of which are battle proven. The AR-15 design allows more Storage and is arguably tougher and more developed. The UZI design is more compact and elegantly folds beneath the weapon and spacer, but is not as strong as the ACE and Carbine tube AR-15 butt. I have examined the AK underfolder style, but it is complex and will conflict with the magazine if the magazine is locked in the weapon while attempting to unfold the stock.

October 19th, 2014 Update: I have abandoned the UZI design. While an elegant idea, it required welding on the receiver itself and generally did not give the performance I was hoping for so I am back to the the AR-15 adapted style. Once together on the weapon, it worked great, strong and reliable. Butt strokes against the heavy bag were taken with indifference and the folding adapter is a strong unit from ACE, who have thousands of units out there. A good reliable product. 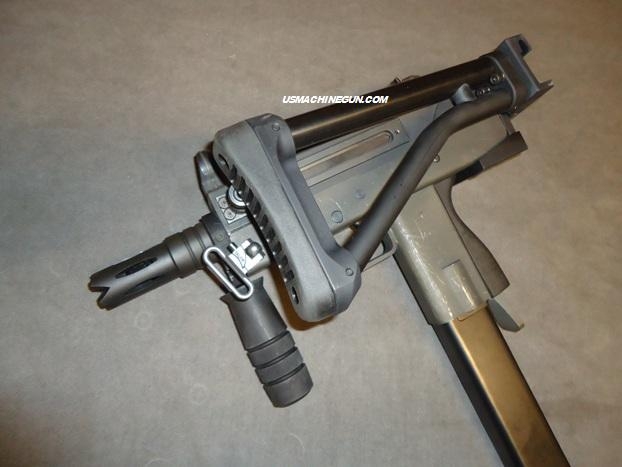 As you can see, this interferes with the side bolt, but the stock can be made to fold to the right if you want. The picture is a stock picture from USMACHINEGUN.COM of a full auto MAC and is meant to show only the stock mechanism.