Due to the bolt bounce issue in blow-back weapons, I have not been satisfied with the PDW. As some commenters have pointed out, the 10mm as a high pressure cartridge will vary the ejection of its brass based on the load fired. This can vary from a tame 90 degree ejection to a fast ejection right into the left handed shooters face. This situation is made all the worse for the weapons compactness. Even worse, the mix of the bolt bounce problem and high pressure cartridges can lead to the case firing before the action is completely closed or when the bolt is already moving to the rear, leading to cartridge detonation and possible injury.

Unless some sort of deflector is added to the design and the blot bounce problem solved, this path may well be a dead end as the weight of the bolt and its action speed are determined by the load and the bolt bounce problem is baked into the design. A high pressure load will always push the bolt back faster than a lower pressure load. This by Newton’s law “For every action there is always an equal and opposite reaction.”. If the bullet goes out the muzzle faster in a blowback weapon, then the bolt receives and equal increase in energy going back.

There is, however, a workaround. While the focus up to this point of the designs herein have been to use a blowback system, the answer to the ejection problem is to move to another platform that is gas operated. The gas operated system keeps the weapon locked till the bullet has left the barrel and the bolt can unlock safely. Gas systems can have a great deal of variance in their action, allowing for operation within a pressure range and more importantly, its ejection can be predicted no matter what the load (given a reasonable range). The bolt can be made lightweight (as long as it is strong) and thus the entire weapon system can lightened.

Well I found all this and more in the AR-15 platform, particularly in the AR-15 Pistol Caliber/Pistol. From now on labeled as a ARPCP.

The 10mm ARPCP. Powerful, Light, Fast to Maneuver, with a range to 350 yards.

The beauty of this design is that there has been a great deal of research into a 45 ACP variant to the standard AR-15, including adapting the Grease gun magazine to the ARPCP frame and left handed and right handed uppers for those who needed a left handed weapon. 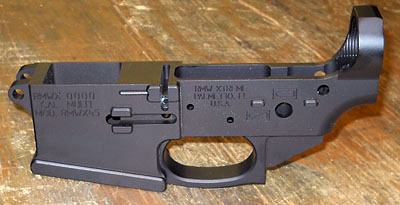 RMW Extreme Grease gun Lower. Can be used for a Carbine or a Short Barrel Rifle or a Pistol.